Something happened to me recently which made me realise there is sometimes a fundamental disconnect between humans and cryptography, it's often been said that humans are the weakest link, and in this post I hope to point out several ways that the very nature of being human hinders our ability do anything securely until the humanness is hammered out.

So, what happened is that I was working on a cryptographic protocol to create a secure communications session with another party, I had thought of seemingly everything: perfect forward secrecy, various degrees of anonymity, authentication of identity, ephemeral keys, active and passive interception etc.

And then I fucked up, really badly, in a way which meant that anybody could MITM the protocol, but up until that point I was absolutely sure I had accounted for everything, implemented the protocol correctly, tested my code and made it very clean and simple to understand.

The mistake was the coding equivalent of one team using centimeters and another using inches, a few single letter typoes introduced during refactoring and code cleaning resulted in a protocol which had passed my fairly rudamentary unit tests but ultimately failed to deliver one of the most crucial guarantees I was trying to achieve, and in turn opened my eyes to what it really means to verify and test cryptography and protocol guarantees.

At this point, I realised I am very much an amateur, maybe a skilled and knowledgable one, but nonetheless there was a fundamental gap in the way that I did things - and that is the fact that I'm human, and inevitably all humans fuckup at one point or another, often repeatedly and without knowing until afterwards.

Thankfully code can be fixed, lessons can be learned, forgiveness can be obtained and insight can be shared, hence this post :)

Originally it was designed to meet the following requirements:

Fairly straightforward, right? For the handshake all I needed to do was take a few of the cryptographic primitives, then with knowledge of their semantics and guarantees carefully devise a series of logical and symbolic operations which when followed resulted in both sides arriving at the same shared key which can then be used to transmit messages to each other using a separate transmission protocol. 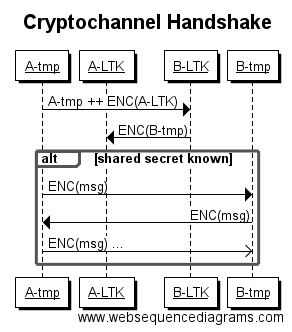 The handshake can be described using our friends Alice, Mallory and Bob, at the high level:

There are still problems with this scheme, especially what happens when the secret keys of one party are leaked, but for this specific use case this isn't a problem that I needed to solve - for something like that I would instead refer to the Signal protocol and the work that Moxie Marlinspike and others have been doing to tackle these kinds of real-world scenarios.

Anyway, what is the Protocol and how does it work?

Firstly both Alice and Bob, where Alice is the Client and Bob is the Server, have long-term Identities; these Identities are Curve25519 key pairs.

Handshake Round 1, Client to Server

Handshake Round 2, Server to Client

At this point Bob knows the session key, but Alice doesn't yet have his ephemeral public key. In order for her to know what it is she must hold the private component of her long-term ephemeral key.

Sure, there are many more attributes that haven't been explicitly stated, but it's enough to infer the gist of it, the core principals of the protocol, and how it guarantees the requirements stated above.

Enough with Formalities, Where did I Fuck Up?

Essentially it was because of four letters, mistyped or switched around while writing and refactoring code. Sods law dictates that when something can be confused for another thing, it will be. For example you have long-term keys and short-term keys and abbreviate variable names to LTK and STK, this can introduce bugs if they get switched without breaking the tests.

And secondly because the tests didn't verify cryptographic properties, only that the API could be used and generally does what is expected within reasonable bounds.

Take the following snippet for example, which uses their short-term key (which was sent in the same packet) to encrypt our short-term key in reply, by changing LTK to STK in a few instances the binding between the two long-term keys is broken:

While the protocol still worked at the API level, the underlying mechanisms that prevented a third-party from sitting in between of the two sides to intercept the handshake were broken, but the problem is clearer when you translate into a transaction between Alice and Bob:

If Mallory intercepted Alice's packet, and she knows Bob's LTK, she could give Bob her own STK instead of Alice's. Bob then creates his own short-term key and encrypts it with Mallory's short-term key, which is intercepted and re-encrypted before transmission back to Alice.

Give me Solutions, not Problems!

If you want to make cryptographic claims you should probably provide a way of proving that claim, but even after research and formalisation you still have to implement it in a programming language, hit keys with your fingers, and pay attention to detail at the same time.

There are four fairly straightforward methods of avoiding these kinds of mistakes:

One of the downsides of these is that it takes more time overall for an algorithm or protocol to gain maturity, but by allowing time to pass and multiple fresh perspectives you are able to dedicate greater levels of attention to it in individual bursts.

To create a unit test for the problem above you would effectively have to create a copy of the bad code to verify that the fixed code isn't compatible, or you would have to implement the MITM code, verify it works with the broken code and then ensure it doesn't work with the fixed code. Is that worth it given the amount of time that has already been spent documenting and verifying code, which if carefully maintained is much more valuable than the problems its encountered.

Alternatively it might be worth investigating ProVerif and using that as a starting point, but there are always the additional steps of translating into another language and implementing it.

Anyway, now we have a solution, and more problems. 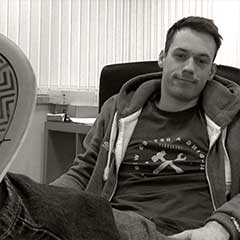